Indian Medical Association is the only representative voluntary organization of Doctors of Modern Scientific System of Medicine, which looks after the interest of doctors as well as the well being of the community at large.

The Association was started in 1928 on the occasion of the 5th all India Medical Conference at Calcutta with the avowed objectives:

(a) Promotion and Advancement of Medical and allied sciences in all their different branches.
(b) The improvement of public Health and Medical Education in India.
(c) The maintenance of honour and dignity of medical profession.


TODAY, I.M.A is a well established organization with is Headquarters at Delhi and State/Terr. Branches in 34 States and union Territories. It has over 3,30,000 doctors* as its members through over 1750* local branches spread all over the country.

HOW THE I.M.A. Functions:

The general control management and direction of the policy of the Association is vested in the ‘Central Council’ to which local branches send representatives and which meets once a year to lay down policies. It delegates its powers to ‘WORKING COMMITTEEE’ (A representatives body of all state Terr. Branches) for implementation of programmes and activities (but without powers to change the rules). This committee meets at least three times a year to execute various activities for welfare of members and the people in matters of health.

President IMA and three vice-presidents are elected by all the members of association, while the Electoral College for the other offices is the Central Council.

Similar situation prevails at the State level, under the Jurisdiction of the State Branches the local branches are established which functions autonomously within the frame work of the IMA constitution.

Over 100 local/state branches have their own buildings where provision of stay fom members is possible.

For these who fulfill the membership qualification, to become a member of IMA, the prescribed from in triplicate be filled & given to the nearest branch along with requisite membership fees. 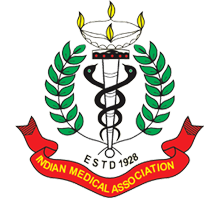